Вы тут
Home > Brands > Starbucks: Founders have been asked to leave their own business

The most famous Starbucks coffeehouse in the world in 1971 was the creation of two teachers and writers who, at the same time, did not perceive their idea as a business: they simply wanted the Seattle residents (the US state) to have the best tea and coffee samples available. in the world.

They first dropped $ 1,350 in cash and each borrowed $ 5,000 – so the first store came and the English teacher, Jerry Baldwin, history teacher Zov Zigan and writer Gordon Bowker, became businessmen. The name of the institution was received in honor of a character named Starbeck from the 19th-century whaling book, and the interior was conceived by the sea. Hence the maritime style of the logo: a siren, surrounded by the full name of the coffee shop (the author of the logo is the artist Terry Heckler). Since everyone involved in this venture people considered coffee a very seductive drink, which can not be resisted, the siren should also be sexy and attractive.

At first, the coffee shop logo was brown, and the siren was depicted with bare breasts. It is clear that there were many disputes over this picture. Soon the lilac breast is covered with hair and the logo itself changes color: it becomes green. This logo is also used now. But it should be said that the very first coffee shop opened from Seattle, and now is adorned with the very first, brown and very seductive logo. 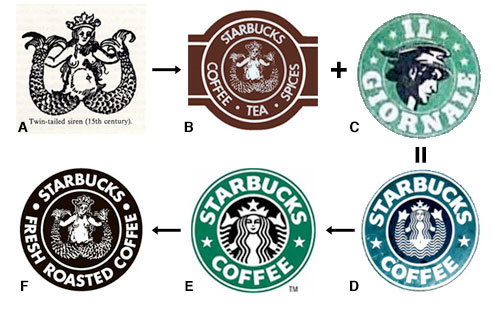 When the first store was already open, its owners did not know how to deal with coffee. They studied correct coffee roasting at Alfred Pitt, the owner of a well-known coffee company at that time. During the first nine months of this shop, they also bought coffee grains. But soon they were able to buy a grain of cereals themselves and open a second store in the university campus.

Business developed in itself, its founders did not actually do anything for success. In the case began to arise questions that inexperienced businessmen could not solve independently, therefore offered to cooperate & nbsp; entrepreneur Howard Schultz to help them develop their business. The most interesting thing is that the founders of Starbucks themselves were not even going to expand. And for more than 10 years, Starbucks has never gone beyond Seattle.

But really everything turned around when Howard visited Milan. He saw interesting coffee business projects in Italy and wanted to develop Starbucks. But its founders did not see it in this sense. Soon, Howard Schultz buys the Starbucks brand from his now-former owners and gets the freedom to act. This was a successful stage in the development of Starbucks. In 1988 the company began trading by mail and released its first catalog: so the products became known to the whole world. And for the next seven years, the company had 165 sales outlets throughout America. Well, and now there is nothing to say: there is almost no such capital in the world where there would be no Starbucks coffee.